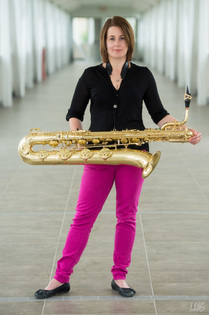 Born and raised outside of Vancouver BC, Holly DeCaigny fell in love with the saxophone in high school and decided soon after that to pursue music in post secondary studies. She received a Bachelor of Music in saxophone performance at the University of British Columbia, under the tutelage of Julia Nolan, before moving to Calgary where she received a Masters degree in saxophone performance, studying with Dr. Jeremy Brown. She completed a Diplome d’Etudes Musicale and a Cycle d’Orientation Professionel diploma from the Conservatoire de Rayonnement Regionale in Boulogne-Billancourt, France, having studied under Jean-Michel Goury, and just recently completed her Doctorate of Musical Arts at the University of Alberta.

Holly is also employed as a musician in the Canadian Forces and through this has had the opportunity to play in the “changing of the guard” on Parliament Hill, as well as in many different military tattoos. She has played for such dignitaries as Queen Elizabeth II, former Governor General Adrienne Clarkson, Prime Ministers Stephen Harper, Jean Chretien, Paul Martin, the Dalai Lama, and others.

Currently, Holly maintains a busy schedule of private instruction and performance. She is a founding member of Timepoint New Music Ensemble, as well as Proteus Saxophone Quartet, and is sought after as a clinician and performer.